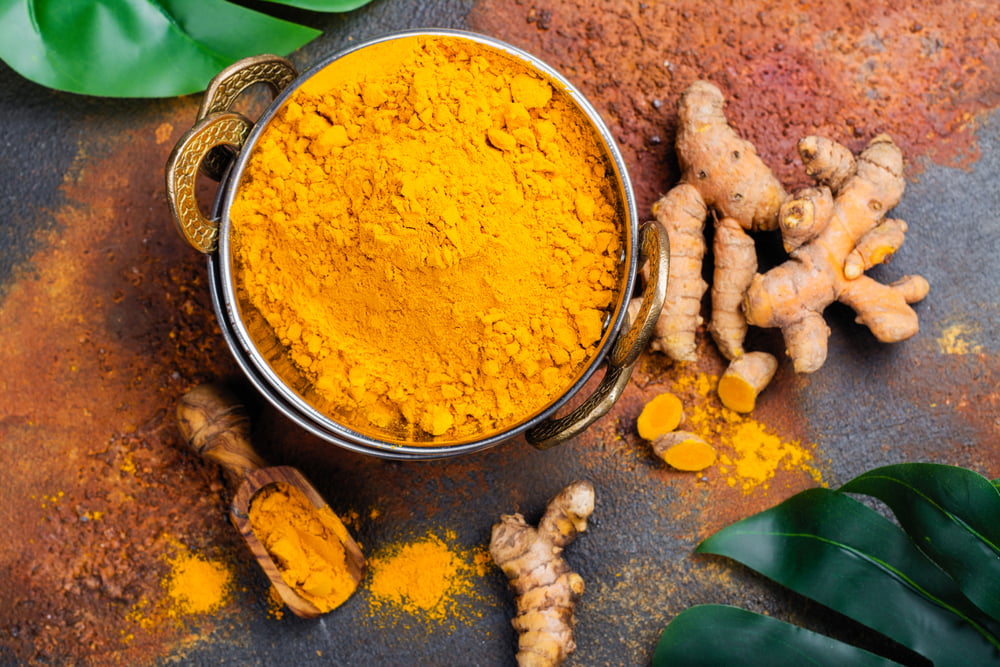 Did you know that Curcumin is the active ingredient of turmeric?

What is Turmeric and Curcumin?

Most people know turmeric as a spice, thanks to its intense aroma and flavour. Traditionally, turmeric was used in medicine as an anti-inflammatory and antioxidant agent. The rhizome/root is the edible part and, can be utilized the raw or as dried powder. You can identify turmeric by its vibrant yellow colour due to the active ingredient curcumin.

Research indicates that turmeric and its active component curcumin is not efficiently absorbed into the bloodstream. Thus, using it to flavour food may not be the best way to tap the health benefits of turmeric.

However, when you turn the turmeric to a supplement, it can be absorbed well. Further, studies show that you’ll tap the health benefits of turmeric if you add black pepper to your turmeric. If you plan to buy medical turmeric, look for the version with black pepper.(1)

The combination is viable because black pepper has piperine that makes the turmeric compounds bioavailable. One study suggested that adding 20mg of piperine to 2g of turmeric increases its absorption by an incredible 2000 per cent.

What Are the Benefits of Turmeric?

Inflammation is an integral part of the body’s system. It helps the body to fight pathogens like bacteria and may be responsible for repairing the damage in the body. It is important to note that not all types of inflammation are beneficial. If Short-term acute inflammation turns into a chronic type of inflammation, it may attack the body’s system, which may lead to the development of western diseases (cancer, heart diseases, metabolic syndrome, and various degenerative diseases) if it is not well managed.(2), (3), (4)

Curcumin is a potent anti-inflammatory compound. Studies show the strength of this compound matches that of some drugs used to manage inflammation. The fantastic part is that it comes without side effects.(5), (6), (7)

Essentially, Curcumin blocks NF-kB, a compound that is believed to have a significant role in the development of chronic conditions.  NF-kB usually ravels in the blood to the nucleus of the cell and modifies the genes that control inflammation. So, Curcumin fights inflammation at the molecular level, and it can modify the development of most western diseases.(8) (9)

2. Important the health of the heart

Curcumin in turmeric has shown to have a positive effect on the health of the heart and the blood vessels.

The compound works by improving the health of the internal lining of the blood vessel and the heart (endothelium). The endothelium is an integral part of the circulatory system as it is responsible for regulating the blood sugar.(11)

When the endothelium’s health deteriorates, a person will age faster and will be at higher risk of heart diseases. So when you take a curcumin supplement, you reduce the risk of developing age-related loss of function as well as cardiovascular heart conditions.(10)

3. Improves the antioxidant capacity of the body

Free radicals in the body react and cause oxidative damage. This type of damage is associated with conditions like aging.

The free radicals react with DNA, proteins and fatty acids, which might lead to severe illnesses.

Antioxidants protect your body against these free radicals. Curcumin is a powerful antioxidant with great potential to neutralize any free radicals within the body. Still, Curcumin boosts the level of activity of the body’s antioxidant enzymes.(12)

Essentially, the Curcumin delivers complete protection against free radicals by both blocking them directly and stimulating the antioxidant defence of the body.(13)

4. Turmeric may Prevent and manage cancer

Many tumours result from inflammation.

Therefore, any compound that has anti-inflammatory properties, e.g., Curcumin may help in treatment as well as prevention of a variety of types of cancer such as colorectal, breast, pancreatic, prostate, and gastric cancers.(14)

A research performed on rats showed that Curcumin might slow the spread of tumour cells, and prevent the formation of a tumour. It works by disrupting the process of creation of cancerous cells at various stages in the cycle.(15), (16)

Besides, they also can interfere with the pathway of cell signalling and may cause the cancer cells to die.(17)

5. Turmeric may improve brain function and reduce the risk of brain diseases

The brain has a compound – Brain-Derived Neurotrophic Factor, which is responsible for making the brain neurones multiply as well as form new connections.

Typically, the brain-derived neurotrophic factor is a type of growth hormone. If the brain has decreased levels of this hormone, the person may have mental conditions like depression and Alzheimer’s disease. (18), (19)

Luckily, Curcumin can increase the levels of Brain-Derived Neurotrophic Factor in the brain. So when you incorporate Curcumin in your diet, it may delay/reverse the brain diseases and improve the general function of the brain.(20)

Still, studies show this it may improve memory and makes you smarter.

6. Curcumin may ease symptoms of osteoarthritis

Osteoarthritis is associated with inflammation, and Curcumin has shown to be effective in managing inflammation.

So people with osteoarthritis can use turmeric as a long-time management measure.

Currently, the proprietary treatment is called Meriva, and it is made up of 75 per cent curcumin, 15 per cent demethoxycurcumin; and 10 per cent bisdemethoxycurcumin. Other components include phosphatidylcholine and microcrystalline cellulose.

The build-up of protein tangles known as amyloid plaques is an essential feature of Alzheimer’s disease. According to in-depth studies can help clear these plaques.

Animal studies have shown that Curcumin can be useful in managing diabetes. Specifically, the compound is effective in managing and diabetic neuropathy, a common condition in people with type 1 and type 2 diabetes. Unfortunately, no human studies have been done.

Even so, rat studies showed that using Curcumin for 45 days in rats was able to reduce blood sugar levels in type 2 diabetic rats. Similarly, it increased the level of plasma insulin.

Experts believe that Curcumin manages diabetes by effecting its anti-oxidative and anti-inflammatory effects. Also, Curcumin can improve insulin resistance and hyperlipidemia, which are closely associated with diabetes.

9. Curcumin may work against depression

A study carried out on a group of 60 people for six weeks showed that Curcumin has some anti-depressant characteristics.(21)

Remember, brain-derived neurotrophic factor in low amounts I linked to depression. Still, a shrinking hippocampus can cause depression too. This area is essential in learning and memory.

Curcumin is known to boost the level of Brain-Derived Neurotrophic Factor (BDNF), hence reversing these changes.

Some evidence suggests that Curcumin can boost the brain neurotransmitters serotonin and dopamine. (22) 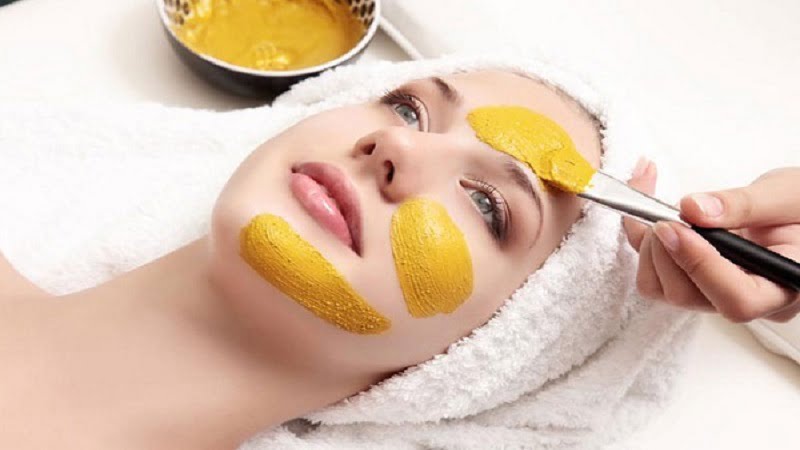 Curcumin is effective in managing a variety of skin condition, including acne, eczema, photoaging, and psoriasis due to its potent anti-inflammatory, antimicrobial, and antioxidant properties.

You can apply directly on the skin as a topical remedy.

Does Too Much Turmeric Have Side Effects?

Turmeric is likely to be safe when taken both by mouth and when applied topically. It doesn’t come with side effects. However, some people may experience

When taken in amounts over 3000 mg per day, turmeric may lead to dangerous abnormal heart rhythm.

Pregnant women must be cautious with Curcumin. It is likely to cause undesirable effects if taken by mouth in medicinal amounts.  Apart from promoting menstrual periods, turmeric can stimulate the uterus, putting the pregnancy at risk.

In men, turmeric reduces the level of testosterone and the motility of sperm when taken by mouth. This might reduce the fertility of men. So people trying to get a baby must use it with caution.

Also, taking high amounts of turmeric hinders absorption of iron. So people with iron deficiency should use turmeric with caution.